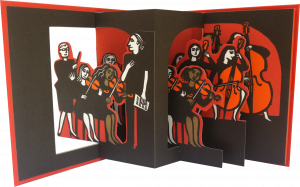 “This record is like the fulfilment of a dream. The sound, the interpretation, there is a quality here that I have been searching for for a long time”. Gerardo Di Giusto does not hide his pleasure in having crossed the path
of Camerata Romeu, an all-female group of Cuban musicians. The subtle writing of the native of Cordoba, Argentina and the sensitive strings of Havana sounds like a marriage made in heaven.

It all began ten years ago, via an email. At the time, the charismatic leader Zenaida Romeu wanted to cover
a song by the Argentinean pianist, as part of his orchestra’s repertoire which favours the works of Latin American composers, such as Egberto Gismonti, Ernesto Lecuona, Leo Brouwer, Astor Piazzolla. Their version of his ‘Musica Argentina Para Cuerdas’ was in perfect harmony with this composer’s vision who, though heavenly influenced by classical music, leaves space for the rhythms and melodies of pop culture. This self-taught Argentinean
had found his musical Holy Grail: the force of folklore and the class of classical music. In this he was following
in the footsteps of illustrious peers such as Villa-Lobos and Bartok, creating a musical landscape in which popular melodies populate each breath, in which the rhythm always defies the laws of the harmonic order of precedence,
as if it was suspended…

This was therefore a meeting in kind. Unclassifiable by nature, Pan-American by essence. This can be found
in this music, an encounter sculpted in the studios of Havana which weaves a musical path which spans the vast Argentinean expanses. Between Gerardo Di Giusto and Camerata Romeu, there is the deep groove of Europe,
the indelible footprint of Africa, the lingering traces of the Amerindian. Between the telluric rhythms
of the sweeping pampas and the dreamlike strings of the large island, between the highly improvised movements
of the pianist and the highly entrancing unisons of the violins, altos and cellos, there is much more than
the complementary nature of colours, there is also a complicity of experiences in those spaces which only exist
in the opening between two worlds. A poetic encounter which is both sweet but which leaves a slightly bitter taste, sensual and spiritual, persistent and fleeting, light and serious, dramatic and playful…

It is this epic at the heart of the new world which describes this partition of a man who knows well that the future
is part of a story which has yet to be written but which cannot exist without its past. It is neither post-modern, neither retro-futurist, but simply contemporary. It is that of a being, in the full meaning of the verb, in which
the dream of reinventing everything becomes reality.