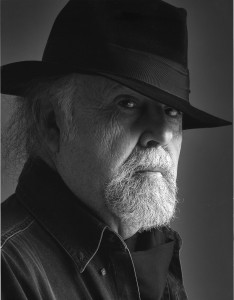 Possessed by a strong magnetic tellurism, Cáceres was always to be found within the limits of the hurricane’s eye.

He arrived in Paris – was it mere chance? – in May 1968. He was not looking for a beach under the cobblestones, but he found one. In Buenos Aires, where he was born, he had been the factotum of the Existentialist Scene. Student of Fine Arts during day time, trombonist at night, agitator, a force of nature, he became the attraction of the mythic Cueva de Passarato, a jazz club and epicentre of revolutionary trends. There converged beatniks, upper class chicks and future Maoist guerrillas, often combined in a single individual.

Cáceres, a tsunami of magma and champagne, was the man in charge. Until one day he answered the calling. In Paris he played with the artist Marie Laforêt, founded the bands Malon and Gotan, painted, produced shows, taught History of Art and did research on the roots of the River Plate’s music. Today he still lectures on the subject, but, above all, he composes and sings, with a lion’s voice, the most relevant pieces that mark the rebirth of tango, candombe, murga and milonga. Caceres is inspired, impetuous, passionate and fiery at this. This youngster, born in the 40s, is the reference for creators in and out of Argentina and Uruguay.

The River Plate, the widest river in the world, separate these two countries, that once were one. Cáceres drinks these rhythms that Cáceres brings from the past, to move the present and point to the future.

Modernism is found in the beginnings.

Tagged with: Cáceres
Posted in Artists