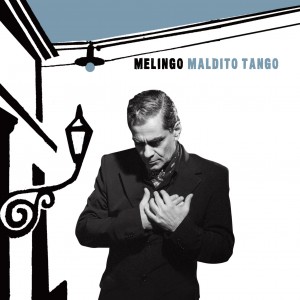 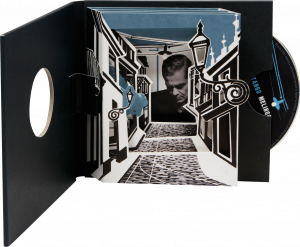 First there was SANTA MILONGA… now here comes MALDITO TANGO. On the first album milonga was holy. That was then. Now, having sanctified it, Daniel Melingo is holding it up for public humiliation. Oh yes. Because you can’t let that damned tango take you in; he venerates it, he turns it inside out and he wrings it out till it bleeds. Rogue that he is, he’s got Buenos Aires oozing from every pore.

What is Melingo the Magnificent’s recipe? Take a pinch of Roberto Goyeneche, the passionate tango singer known as “El polaco”, for some true tango roots, mix him up with a bit of Nick Cave, the bad seed of the underground, some Tom Waits for an arty vibe, add a little Gainsbourg, and all these growling, throaty voices and lived-in faces will give you some idea of the devilish Melingo, an old rascal who isn’t actually that old, though he’s infinitely roguish.

His tango is built on a bed of rock. That’s the way it is in today’s Argentina. It began in the 80s when he was cutting his teeth on the turbulent alternative rock scene born of military dictatorship and collapsing moral order and featuring groups like Los Abuelos de la Nada (the ancestors of bugger all!) and Los Twist. So is Melingo off his head? It’s more complicated than that. The impish singer with the enormous voice is also a sparrow chilled by the damp morning mists of the river Plate.

The art of tango is a balancing act: you have to sway and bend without falling over. A little like the art of finding happiness. Daniel Melingo distorts the codes of tango; he perverts and subverts them, and hey presto, they spring up anew. And he’s always the winner: “Tango does what it wants with us,” wrote José Luis Borges. An observation he made during Carlos Gardel’s era, and which still holds true some 80 years on.

Melingo is breathing new life into tango-cancion, the enduring musical genre associated with Gardel. Impertinent and oh-so-pertinent, our man illustrates the notion of complementary opposites. He uses MALDITO TANGO to bring the music out of the shadows and into the light as he summons the poets of both yesteryear and tomorrow.

As he breathes in the air of Buenos Aires, he conjures up a gallery of characters on whom life has taken its toll in a series of off-the-wall snapshots: the pickpocket on the bus, the weeping prostitute, the tramp working his way through the rubbish bins, the day worker who dances the night away, the kid dying of loneliness, the Argentinean of Montmartre, the lovers with their cautious and guarded secrecy, the loaded old playboy dying in the arms of the whores, the police raiding a bar and, of course — tango has always had a soft spot for losers — the guy who’s been abandoned.

MALDITO TANGO: it’s been cursed for so long it should really be dead by now. But no, along with its family, big brother Milonga, elderly cousins Waltz and Chamamé, the rural uncle from the great north-east of Argentina, tango is a mirror for urban wounds, verging on the euphoric, cocking a snook at ill-humour and petulance. In Melingo’s work, modernity resides in its origins; refusing to confine himself to the role of producer, he leaves the beaten track to trample his way through alleyways and explore what makes up a city.

His accomplices are lunfardo — tango slang — experts as well as a troupe of adventurous musicians, what you could call a gang of rogues who like to party. Instrumental interludes are peppered with a wall of sound from a clarinet here, the undulating rhythms of a musical saw there, all to the beat of the cajon. We glimpse the furtive shadows of Juan-Carlos Caceres and his blacker-than-black universe, and Cristobal Repetto, the good looker who “swallowed a gramophone”.

SANTA MILONGA was a roundup of years and years of adventures. MALDITO TANGO has been constructed, broken apart and constructed once again over six months. Nothing like a jazz album — or a tango album! This is a flamboyant and rare piece of work that breaks the rules of tango by stirring up the mix (Julepe en la tierra), beating time with haunting images that border on the new wave (Pequeño paria) and jamming in a psyched-out litany (Eco il Mondo).

A last piece of advice: his stage show, in street theatre style, is absolutely unmissable. Too precariously balanced to be anything other than carefully planned; his foolish grimacing Pierrot will have you howling with laughter whilst bringing tears to your eyes, the tragi-comic posture giving him the look of someone trying to hide behind a streetlight after getting up to no good… Scram, Melingo, you’re too far gone!

It is obviously no accident that Melingo is signed to Mañana, Eduardo Makaroff’s groundbreaking label (Gotan Project’s Argentinean member): his tango, all his music, is already on friendly terms with tomorrow…