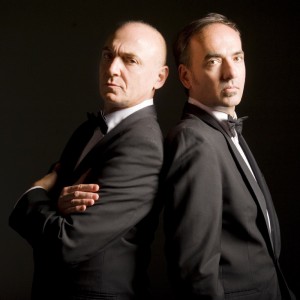 When Buenos Aires native Eduardo Makaroff and Swiss born Christoph H. Müller met in Paris during the creation of Gotan Project in 1998, they both already have a rich musical career background, in their countries of origin as well as in France.

Alongside their activities within Gotan Project they have written and produced together music for feature films, documentaries and advertising. From their soundtrack of the movie « El Gaucho » by Andres Jarach, they created in 2008 an album of the same title, their first release as « Müller & Makaroff. »

Three world tours with Gotan Project later, the association « Müller & Makaroff » takes a new dimension with « Reencuentro », a clip and a short film initiated by Renault and directed by Pablo Giorgelli (award winner at Cannes).