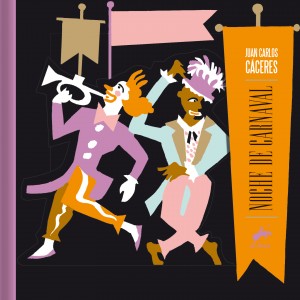 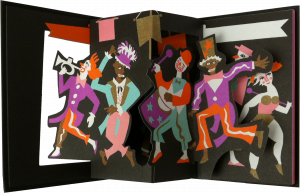 Many are those now raising their arms to heaven and shouting “Hallelujah”!
Cáceres is back with his new album “Noche de Carnaval” and that’s great news for a very particular group of people.
Those who boast authenticity, potency and passionate inspiration are to be applauded.
Cáceres is unique and he is returning like a whirlwind, expanding his music genre to match his urgent pulse rhythms.
Cáceres is back, more personal than ever, utterly rooted and utterly present.

His synthesis of River Plate sonorities and music from all over the world is post-modern without intending to be so. Cáceres doesn’t calculate, he doesn’t speculate: he palpitates.
He simply reflects the flashes of the soul, like a dagger gleaming in the pampas, like the silvery brilliance of a jet flying from Buenos Aires to Paris.
To the tango, milonga, candomble and murga – styles specific to the River Plate region – are added Swing, Dixieland and the Charleston, among many other influences, which is not surprising since Cáceres was once a jazz trombonist in existentialist Buenos Aires.
As his fans know, he is also a pianist, singer, composer, painter, art teacher and lecturer on Argentine history. In “Noche de Carnaval” there is no bandoneón [Argentine concertina], the most characteristic instrument of the tango.

A master of experimentation, Cáceres instead used the bass clarinet, sax and cello on which to base the songs.
None of the musicians who participated in this work is a mercenary or collaborated by chance:
they all share with Cáceres and the producer Eduardo Makaroff a deep attachment to the new Argentine music, to the tango and its delightful derivatives, and to the fusion of the old and the modern.

All are aware of Cáceres’ own significance on the world music scene:
he is a giant and here is his “Noche de Carnaval”.
Hallelujah!