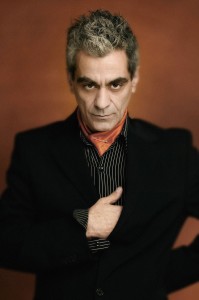 Melingo is not crazy.
That what makes his improbable tangos possible, given shape by craziness. Melingo is a person, of course. He has survived himself, his infinite personal journeys, to become a literary character of flesh and blood.
Melingo is the legend of Melingo, the main protagonist in a life sometimes too intense, which had, inevitably, to lead to the tango.
To be Melingo, one must walk the streets sniffing out poetry like a bloodhound. One must dance like a whip and sing like a scar. Melingo is major musician. He studied at a Conservatoire but retains little of that institution. He was – and always will be – a furious adventurer, fevered, hallucinating. A bohemian of Buenos Aires, so of the world. We can call him Maestro because he has achieved simplicity. Nothing more natural, then, than the roaring fire of its tangos. Santa Milonga pulverises the barriers between the sacred and the profane. These songs hold as much adoration as irreverence. There is a truckload of orthodoxy and tons of heresy. There’s excess and beauty. Love and mockery. Melingo enters the high places of River Plate music without knocking. The gates open as he passages for he has won himself the right to play with the law of tango.
Pure tango, then : The wonderful madness of Melingo.

Tagged with: Melingo
Posted in Artists