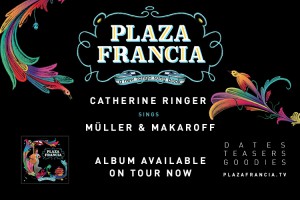 This is the story of two worlds sizing each other up, meeting and getting to know each other.

On one side, the Argentinean Eduardo Makaroff and the Swiss Christoph H. Müller, the two pillars of Gotan Project, looking for extra curricular activities: to establish a bridge between tango and pop music, with original themes. To help them do this in style, a few female singers agreed to step out of their usual repertoire (rock? jazz? flamenco?). So they started to write for these singers and established a list of singular and prestigious vocalists outside of the world of tango.

On the other side, Catherine, who in the recent years managed to impose the name Ringer, one of France’s great voices, who very serenely succeeded in building a career for herself after the Rita Mitsouko: after 30 years in a band that marked French rock forever with its peculiar style, she has bravely established herself as a solo artist. And then…

A phone call was enough… Müller, a die hard fan of the Rita, suggested Catherine Ringer. Makaroff tried his luck. Immediately, Catherine said: “Who does this gorgeous Argentinean accent belong to?” Makaroff mumbled: “Well, I have a project that’s not typical, or nostalgic, or Gotan, or Rita Mitsouko”. “Why don’t you tell me what your project is about?”, was her answer. Edouardo took it as an encouragement.

The Gotan pair brought her the lyrics and arrangements for two songs. She recorded the vocals. They were amazed by her ease. Christoph Müller called it “organically natural”. Catherine loved the project. She has a penchant for all things Latin: remember ‘Marcia Baila’, one of Rita Mitsouko’s most emblematic songs, a tribute to Marcia Moretto, an Argeninean dancer based in Paris with whom Catherine had worked before starting Rita. She also sang in a musical by Argentinean director Alfredo Arias. And it’s clear that “La Ringer” loves to perform and change styles. “Tango also belongs to me because it’s universal. I always loved singing old sad, nostalgic French songs”, she says, “and I find it similar to tango”. It’s true, that repertoire suits her grain of voice. And with a soupcon of French accent, it’s absolutely perfect!

They asked her to sing – in Argentinean Spanish, of course – on the entire record. They called it Plaza Francia. According to Gustavo Beytelmann, the legendary Paris-based Argentinean tango arranger, who worked on Plaza Francia: “She has a tango personality, which is rare”. This untraditional tango reaches out to pop music with a rhythm close to Catherine’s musical past, and with climatic effects in the orchestration. This is all ensconced in Beytelmann’s silky setting of piano, bandoneon and strings. It’s more than tango, it’s France meets Argentina, Piazzolla meets Santana.

The lyrics, signed Makaroff (Eduardo and his brother Sergio), speak the language of tango: heartbreak, drama, exile… and love. This is no small event, for with this record, Catherine Ringer opens the doors to the Americas, opened one century before by another French lady… Edith Piaf. From Buenos Aires to Nueva York, she has a good number of ears to seduce. She’s about to surprise the world, for once again, “La Ringer” demonstrates that she has more than one string to her musical bow!